Although he grew up in Knoxville, Tennessee–at the edge of the Great Smoky Mountains, he had never seen or heard a dulcimer until he was a wet-behind-the-ears Freshman at Maryville College (located even closer to the 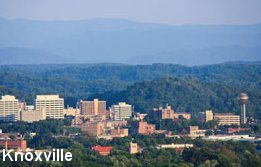 edge of the Smokies in Maryville, Tennessee). Maryville College is a small, liberal arts institution, which had a total enrollment of about 750 students in 1976. What it also had was a 3-week class nestled between the Thanksgiving break and the Christmas holidays. Referred to as the “Interim” class, it was a chance to intensively explore a single subject, often very different from the regular curricular offerings. It is now referred to as the “J-Term” and takes place in January.

One of the Interim classes offered in the Fall of 1976 was “Building and Playing the Appalachian Dulcimer” and he didn’t sign up for it–his friend Adrienne Bennett signed him up and he decided “why not?” The fact that he did not know what a dulcimer was, nor have any experience in woodworking was not a deterrent to taking this class. After all, Freshman 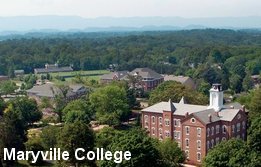 year was one grand adventure after another. Fifteen students purchased beautiful dulcimer kits, supplied by Mr. Sam Carroll of Nawger Knob Woodworking in nearby Townsend, Tennessee. These were the “fiddle” shaped dulcimers popularized by the legendary Bill Davis of Gatlinburg. (When Sam retired to Florida, Mike Clemmer took over his business and continues to make beautiful instruments in this style.)

Being a poor college kid, he couldn’t afford the $75 for the kit, opting instead to build a dulcimer from scratch. Mentoring the 3 scratch-builders was Joe Showalter, an upperclassman from Black Mountain, North Carolina. Tim chose to build an instrument that looked nothing like the kits, designing a very wide teardrop shape made entirely 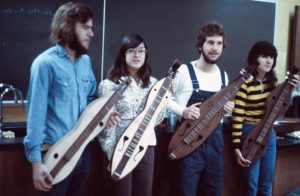 from walnut. The last 3 days of the class were spent learning 3 songs — a requirement to pass the class.

That was enough to light the fire, but since most of the year was spent in college classes, construction would have to wait. That next summer, while working as a counselor at Camp Deerwoode in Brevard, North Carolina, he received his first order from one of his colleagues — a 5-string hourglass dulcimer. The wood came from an old mahogany table he acquired.

In the last 40 years, he has built 46 instruments of all shapes and sizes, whenever there was time to work. Most of these have gone to friends and family all over the country. As a career teacher in the Citrus County (FL) school system for the last 35 years, the dulcimer building has had to be pursued as a hobby. With retirement a few years away, he has methodically geared up his small shop to increase production, although he still prefers to build each instrument one at a time.

Tim’s other hobbies and interests occasionally demand some of his attention. Some of these were nurtured at Maryville, as well. He was already a member of the MC Concert Choir when he auditioned for his first theatrical production. Because of the small size of the school and an atmosphere that encouraged a wide range of interests, he became heavily involved in mainstage productions and was a charter member of a repertory company, The MC Playmakers. It was his 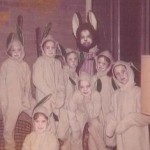 involvement in a children’s musical, The Velveteen Rabbit, where he discovered an affinity for working with children and changed his major from  English to Elementary Education.

In 1981, he came to Citrus County, sight unseen, for a 4th grade teaching position at Crystal River Primary School, where he directed a production each spring for the next 7 years. He was involved in the local community theatre scene (both in Citrus and Marion Counties), but in the mid-80’s started his own group, The Citrus Actors Theatre, with some family and friends. About the same time, he was offered the chance to create a drama program at Crystal River Middle School, and developed a curriculum that featured creative dramatics and competitive Improvisation for grades 6-8.

Sent with a colleague on an overnight trip to observe a Middle School in Clearwater, Tim saw a karaoke show for the first time and was awe-struck. Here was instant performing arts for “the masses”, and he realized that he must bring this to Citrus County. He acquired the initial funding, purchased the equipment needed, and started Entertainment Concepts. Tim debuted karaoke in Citrus County in August of 1990, at a Splashdown Party 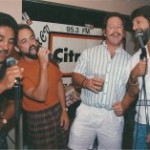 (Sponsored by Citrus-95 FM) at Cracker’s Bar and Grill in Crystal River. It was so popular that the restaurant owners invited him to continue offering karaoke every Friday and Saturday night — for the next 14 years!

Around 1995, changes at Crystal River Middle School moved him to search for something else within the school system, and Tim discovered that his wide range of interests would serve him well as a Library/Media Specialist. He began at Rock Crusher Elementary, acquiring the needed certification while on the job, and moved to Citrus High School in the same capacity in 2002. At that time, he had partnered with Bonnie Rybak, who had been the long-time Media Specialist at CHS. However, since Bonnie’s retirement in 2010, the program has been his alone.

Tim’s other pastimes reflect this wide spectrum of interests. He has been a member of the 8th Florida, Company B Civil War reenactment unit since 1997. This is a Confederate Company, but he also can portray a Union soldier when necessary. Additionally, he has been a homebrewer since 2003, specializing in ales of all styles. He created the first web page for a Citrus County school back in 1995 for Rock Crusher Elementary and was the webmaster for the Nature Coast Civil War Reenactment from 1998 through 2013. When there’s time, Tim still dabbles in the theatre, most recently appearing in several shows at the Art Center Theatre including The Psychic and Little Shop of Horrors and directing You’re a Good Man Charlie Brown and Murder at the Howard Johnson’s.

He and his wife, Kim, also enjoy traveling whenever possible. One of the perks of being a teacher is having the summers free. In the summer of 2016, they completed a 5 1/2 week jaunt across the continental U.S. covering a total of 8,000 miles. They kept a daily blog of their adventures while on the road.

At the conclusion of the 2016-2017 school year, Tim announced that he would retire in December of the 2017-2018 year, to keep the door open for a possible run for School Board. It was decided to place him back in a traditional classroom and he could serve as a resource for the new Media Specialist.

From August through December of 2017, he taught 9th grade Physical Science classes, subsequently retiring at the end of the semester — a career spanning 37 years.